This wins the Internet

Too brilliant for the ‘and finally’ section, so I break with tradition and give you this bit of pure, unadulterated genius. Hats off to the DJ.

Haven’t laughed this hard in a long time.

Are those Reebok or Nike?

The one with the dodgy banana

A tale of woe, customer service and, finally, redemption and happiness told through the eyes of Sainsbury’s customer @HBChapple and Chris from the @Sainsburys Careline team.

Not happy with peeling quality of @sainsburys @SainsburysPR bananas all 6 of them looking like this #outrage pic.twitter.com/9hEpB4I088

@O_Goldsmith @sainsburys @SainsburysPR I made a cartoon to give you better understanding of my turmoil and sadness pic.twitter.com/0l4iKY94Cc

I love a burger. Dirty or posh, van or fancy restaurant. Breakfast, lunch or dinner. It doesn’t matter. A burger sorts me right out and I’ve had a few over the years. They come in all different sizes, combinations and tastes. And it is a very rare occasion indeed, where I come across a bad burger (fries are a different ballgame entirely. So much can go wrong with fries. But that’s for another day).

Now, making your own burger at home is not particularly difficult, but not something that I tend to do very much. But what if you could digitally build your burger, have all your friends vote for it and the one with the most votes gets added to McDonald’s menu?

There you have the simple, yet brilliant premise of McD’s latest #MyBurger campaign.

After careful deliberation, clicking and scrolling, I am proud to give you my BCG Burger: Bacon (because everything with bacon is just better), Cheese (two slices of black pepper cheese to make the beef pop and add some stability to the construction) and Guacamole (equal parts cashing in on the oh-so-trendy Mexican food craze,  and also, guac is just so goooood) burger. Perfected by a generous sprinkling of jalapeño peppers for that extra oomph, rocket to give it even more of a peppery freshness, and held together with a brioche bun and OMG JUST GET ME A BURGER ALREADY.

The BCG now takes it’s place amongst all the other delicious creations, which you can drool over in the gallery section of McDonald’s My Burger site.

As you salivate over sooo much beefy goodness (on that, why the heck can you only make a beef burger?), you also get your fair share of burger stats. And which PR person doesn’t like a survey?!

Voting for a burger is simple. But what I really love about the voting process is McDonald’s reinvention of the Captcha. Rather than some strange maths question or indecipherable characters to prove that you are, in fact, a hungry human, you are asked to pick two items from McD’s menu by this prompt: 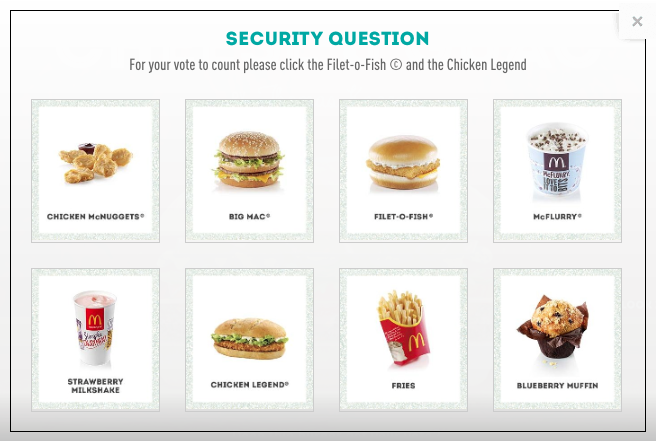 A gloriously simple and fun campaign, one that get’s McDonald’s customers actively involved in the brand by creating a burger that could end up in restaurants nationwide. And who doesn’t like sharing something tasty with their friends saying: “Look! I created this! Isn’t it great?”

My Bacon, Cheese & Guac burger for McDonald’s. Vote for it, they might end up making it https://t.co/bFToOc4Nqq #myburger

To celebrate the launch of their delicious new menu item ‘The Wing Roulette’, the clever chaps at Nando’s have come up with a spicy  campaign centred around user generated content.

Customers are encouraged to not only brave the fiery madness that is the selection of 10 chicken wings dipped in peri peri sauce of unknown strength (ranging from the tangy mango and lime to the teeth-melting extra hot) but to then use their napkins and sauce covered fingers to produce some tweetable art along with the hashtag #wingroulette.

Nando’s have also added a Wingroulette companion game to their iPhone app that tells you which of your friends gets to eat which chicken wing (and here I was planning to order the 10 wings for myself…).

To keep the campaign going, Nando’s are relying heavily on the TV guide, creating finger puppet versions of popular shows like Game of Thrones and 24

If Mondays were a person… #WingRoulette #GameOfThrones #FingerSelfie #Nandos #GoT

There’s many more #Wingroulette finger selfies on Twitter – a lot of people are keen to win their year’s supply of free Nando’s!

I’m conflicted about this one. Adweek calls Coke’s latest commercial the first ever TV ad made completely from user generated content, which, as we all know, is complete and utter bollocks. Sainsbury’s did that with Christmas in a Day, thank you very much, next question, you utter muppets. But then again, Adweek also called this the best corporate apology ever posted to Twitter. Damnit. Anyway, just watch the clip.

Dutch drink Vifit either helps you concentrate on studying in the uni library while an attractive blonde does a strip tease or drinking too much of it causes blindness. I suspect the people behind this ad were going for the former.