A quick though on Apple Watch’s turn by turn navigation.

I had to get from Waterloo Station to Bermondsy Street this morning. Great chance to try out the turn by turn navigation with Apple Maps on Apple Watch – it’s a route of never taken, so I was relying completely on The tiny device on my wrist.

Now, I’d much rather use Google Maps as it has directions for cycling, but it’s not available on the Watch.

So I find the place I want to get to on my phone and I merely have to open the app on my Watch. It picks up the directions from the phone and I tap start. 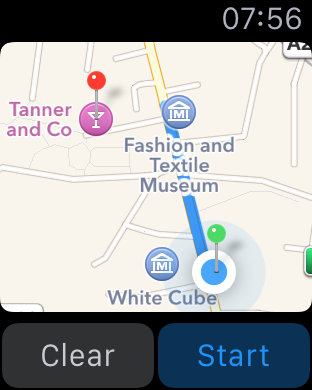 The shot above is for illustration purposes only – I’m not taking screenshots while cruising around London.

Problem is, once you hit start the screen goes black and provides you text directions on where to turn off and what the street name is.

Now. This is bad.

Not all streets are clearly named in London. They don’t follow a grid system like many cities in the U.S., so navigation this way in an area you don’t know is useless.

Ah. But the watch taps you on the wrist when your supposed to turn!

Again, when cycling it’s hard to discern between bumps in the road and instructions to turn.

Now, you’ll notice the little white dots at the bottom of the screen. You can swipe left to get to the map view. Hooray!

Problem is, as soon as the screen goes black – which is seconds – it will default back to the text directions view.

So I found myself awkwardly tapping my left wrist with my right hand to activate the screen as I ride, swipe left, and then hold it up to see where I’m supposed to be going.

This means I don’t have my eye on where I’m actually going.

On roads I don’t know.

Not cool Apple Watch, not cool.